You might make it easier for the hurricane to destroy your home.

n the aftermath of Hurricane Harvey, and with Irma and Jose bludgeoning the Caribbean en route to the southeastern United States, North Americans are once again fortifying their homes and property for the impending storm. One precaution that homeowners throughout the generations have taken is opening up a window during a hurricane to supposedly prevent a massive pressure differential from blowing up your home.

Well, That’s hogwash. There is no need to open up any window in your home during a hurricane (or any similar natural disaster, like a tornado). The persistence of this dangerous belief illustrates humanity’s fundamental misunderstanding of pressure physics, and of the engineering of buildings.

Massive winds being created by a powerful storm obviously create an extreme amount of turbulence in the outside environment. That turbulence, many assume, pushes onto a building from the outside, causing pressure to increase on the inside that can reach a fever pitch if there is no release.

Long ago, in the wake of tornados, houses and other buildings sometimes looked as if they exploded into a burst of debris from some sort of internal boom. It was thought that these explosions were the result of the pressurized air explosion imagined above.

So experts — including scientists — began to spread the notion that it’s best to open up a window, to allow the pressure from the outside to equalize with the inside.

That’s totally wrong. Eventually, scientists began realizing the houses were being blown up because of the open windows — gusts of wind would push in homes and streak upward towards roofs, while wind from the outside would thump endlessly on the roof. The resulting set of forces would lift the roofs off and make it look like buildings exploded due to forces from inside — which was technically true; it just wasn’t because of a massive buildup in pressure.

Moreover, it’s key to note that a house isn’t an airtight system — there is no pressure differential being created because houses are ventilated systems. Your home won’t be inundated by a massive internal pressure buildup because air is still flowing in and out from the home at a safe rate. You just need to make sure there is no open space where the wind can be funneled through and allowed to cause serious destruction.

With over 10 years of experience in the field and around 1,700 satisfied customers, we ensure a great experience and only provide top quality products! All hurricane impact and proofing are installed to meet the requirements of your home and city guidelines.

Get in touch with us for a complimentary consultation. 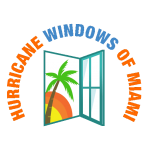